Skip to content
Barcelona: Cruise Port to the Mediterranean

Cruise Port To The Mediterranean

Barcelona, Spain, has become a popular port for cruise lines. Royal Caribbean, Celebrity Cruises, and Holland America, to name just few, offer cruises to the Western Mediterranean.  The city’s art, architecture and culture make Barcelona a perfect city for either a pre-cruise or post-cruise stay. What better way to immerse oneself in Spain then to explore the capital of Catalonia.

From the cruise ship pier, head to Las Ramblas, a wide avenue perfect for strolling. On the west side is the Raval neighborhood, known for theaters, nightlife, and La Boqueria , an open-air market where you can sample Iberian ham and other regional specialties. On the east side is Barcelona’s oldest neighborhood, the Barri Gotic, full of historic buildings and airy plazas. Sprinkled among the stately churches and Roman-era walls are boutiques and cafes that serve delicious tapas (small plates) of Spanish omelet, Manchego cheese and Galician-style octopus, among other delicacies.

You don’t have to be an architecture fan to enjoy the work of Antoni Gaudi, the architect most closely associated with Catalan Modernism. Several buildings in Barcelona provide a close-up look at his distinctive, organic style. The best known is the Sagrada Familia, a multi-spired Catholic church that has been under construction since 1882. Gaudi also designed Casa Battlo (don’t miss the dragon-like spine on the roof); Casa Mila, with an undulating stone façade and chimneys designed to scare away spirits; and Palau Guell, an elegant family home.

When the weather is fine, Barcelona has lovely beaches and wonderful parks to offer. Parc Guell has a fabulous raised terrace and storybook buildings designed by Gaudi, and the park’s highest point offers panoramic views of the city. The views are also wonderful from Parc Montjuic, home to venues from the 1992 Summer Olympic Games, a fortress, the National Art Museum of Catalonia, and the Magic Fountain, where evening fountain shows are coordinated with music and lights.

In addition to the National Art Museum, art lovers can visit museums dedicated to Picasso and Miro. Sports fans will want to see Camp Nou, home of Futbol Club Barcelona, one of the world’s most successful teams. Even when there’s no game on, it’s inspiring to tour the 99,000-seat stadium and immerse yourself in the FC Barcelona Museum.

Barcelona has great train links so using Barcelona as your base, you can take a train to Madrid for a day, or head south along the Mediterranean coast toward Valencia. For more insight into things to see and do in Barcelona, Catalonia and other parts of Spain, talk with your travel professional.

Ceiling of the Sagrada Familia 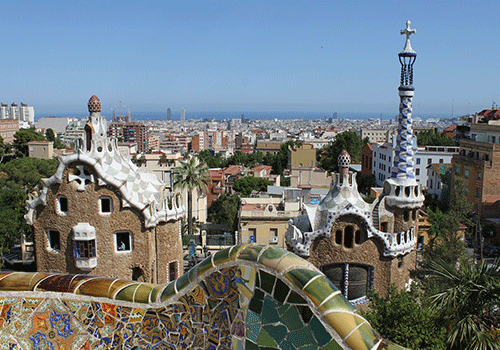 The City from the Parc Guell 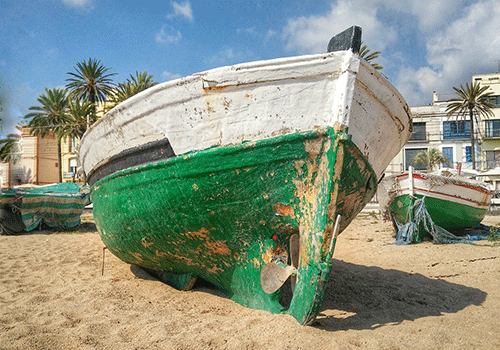 Boat on the Beach